Joe Rogan is being mocked for ranting about a false story about Australians being banned from growing their own food – before being told live on air that it was fake.

Rogan, 54, who has been criticized in the past for repeating COVID-19 misinformation and conspiracy theories, was convinced a lawmaker in New South Wales,  Australia was trying to ‘pass a law that won’t allow you to grow your own food.’

‘I want to know what their justification was, but I’m pretty sure it had to do with agricultural contamination,’ Rogan said on Thursday’s episode of his podcast. ‘You could justify it if you’re a real piece of s**t.’

Rogan went on to call Australians ‘f**king creeps’ and said the government ‘got a good grip on people during the pandemic.’

‘We gonna stop these motherf**kers from growing their own food,’ he continued to mock. ‘Because that’s how you smoke out an anti-vaxxer, because you can’t go to a grocery story anymore, and you can’t grow your own food.’

Joe Rogan, 54, was mocked for ranting about a fake news story on his podcast and realizing live on air that it was fake. Rogan was convinced that someone in Australia was trying to ‘pass a law that won’t allow you to grow your own food’

While the controversial podcaster was mocking the supposed Australian, his producer Jamie Vernon was Googling.

Vernon said: ‘I know what to look for, but the closest thing I could find is something like this, but that’s not what you were saying.’

The producer found a similar article that was based in New Zealand, which was not shown to viewers, but Rogan was insistent the new law was based in Australia. It is unclear what food-based law or process was taking place in New Zealand.

‘It’s got to be a real thing,’ Rogan said, disheartened. ‘It seems too good to not be,’ he justified.

But Vernon insisted nothing came up under the search terms: ‘Outlaw food Australia.’

‘Not a single thing comes up,’ Vernon said. ‘Except for that, which was a false thing,’ he said.

Rogan was quiet for a moment, before declaring: ‘Yup, I can’t find it either,’ as he continued to search for it on his phone. ‘Damn it, it better not be fake. It might be fake.’

His guest Bryan ‘Hotep Jesus’ Sharpe, however, tried to inject a happy note, stating: ‘But even if it’s fake, the fake is usually the warning.’

Twitter users had a hay day with Rogan slip up, with an Australian writing: ‘I live in Australia. Do you know how absolutely bats**t ridiculous it would be for the government to even try to pull of something like that. Most of the country is rural. We have free elections. This is insane.’

Another wrote: ‘The podcaster Joe Rogan is so dumb he thinks it was Australia that penalized its citizens for growing their own food. It was, in fact, the United States of America that did that (Wickard v. Filburn).’

Most users slammed Rogan for not taking the time to factcheck that statement before airing it on his podcast, with Reuters journalist Nick Hardinges writing: ‘If only @joerogan had taken the time to read my very useful @ReutersFacts fact-check on this. Neither Australia nor any part of Australia is passing a bill that will prevent people from growing their own food…’

Another user, Jeff, wrote: ‘What would be better is if he did the research BEFORE speaking about it on his podcast.’ 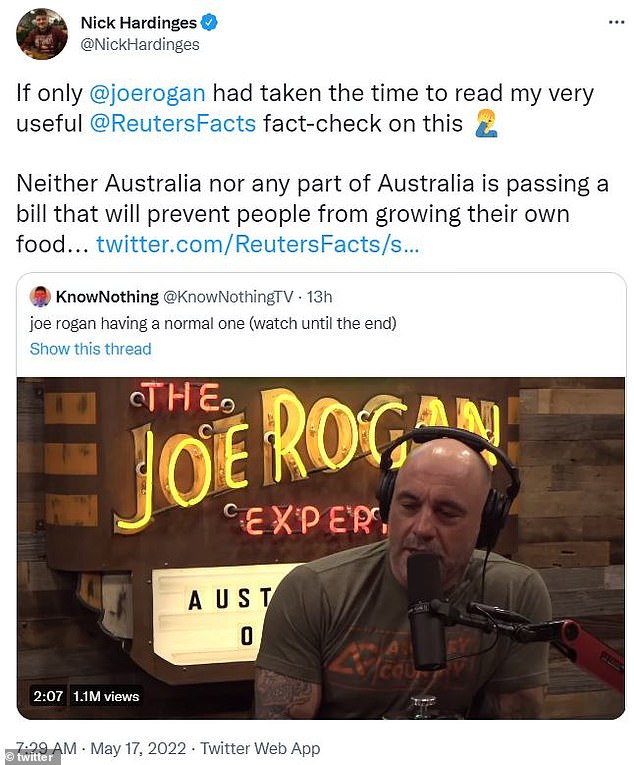 This isn’t the first time Rogan has been busted on spreading false information. He was ‘canceled’ earlier this year and his podcast was threatened to be taken down after the COVID-19 misinformation and a video surfacing of him using the n-word.

On an April episode, Rogan was asked by his guest, British author and political commentator Douglas Murray, about being pilloried by the mainstream media.

‘You have been put through the ringer since we last met,’ Murray tells the former UFC commentator. ‘They did a number on you. Wow.’

Rogan replied: ‘It’s interesting, my subscriptions went up massively — that’s what’s crazy. During the height of it all, I gained 2million subscribers.’

If true, that would raise his subscriptions to around 11million from the 9million he had when the controversies began.

Spotify, which reportedly paid a minimum of $200million to bring the podcast to its platform, doesn’t usually disclose its JRE subscriber numbers to the public.

However, a source close to the Hollywood Reporter squashed rumors that the show spiked due to a specific event, instead confirming that its audience has grown over the last year, according to the outlet.

Meanwhile, Rogan also took the opportunity to roast CNN in an April episode after the news outlet wrongly claimed that he’d taken ‘horse dewormer’ to relieve COVID symptoms that he had contracted last September.

Rogan was actually taking the FDA-approved form of Ivermectin – mainly used to treat people with intestinal strongyloidiasis and onchocerciasis, two conditions caused by parasitic worms. The drug is usually sold in the form of tablets and was approved to treat external parasites like head lice and for skin conditions such as rosacea.

‘Yeah, [the media] went for it. It’s also fortunate that the people who went for it were CNN,’ the popular podcast host said. ‘They’re so untrustworthy and people know how biased they are and socially weird their anchors are.’

Rogan’s roast didn’t stop there, as he slammed the cable network for its failure to sustain its own streaming service, CNN+, three weeks after it had been launched.

‘They spent 300million dollars, they get 10,000 subscribers,’ Rogan said. More than 300 people were cut from the $5.99 per month streaming service, which featured popular journalist Chris Wallace after his departure from Fox News.

‘Imagine the hubris of thinking that something that people don’t want for free… that you’re going to charge money for it,’ the host added.